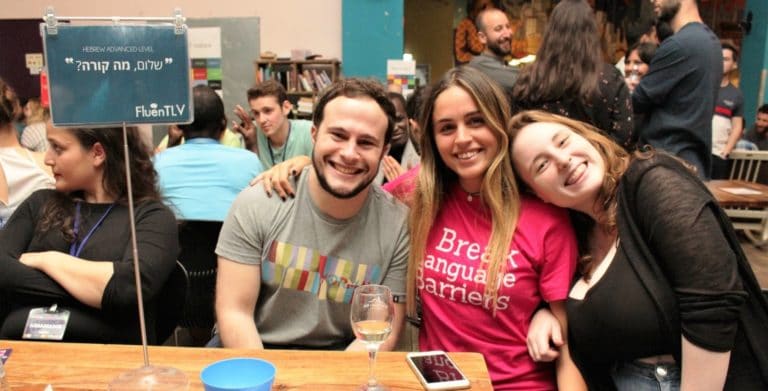 The Fluent concept? Learn a language while immersing into the culture and practicing with native speakers.

The social startup Fluent House of Languages was created to provide a response to two main problems:

The first: people spend a tremendous amount of money, time and energy trying to learn foreign languages in an inefficient way. They are taught rules of grammar in a passive  and static environment, and end up failing to achieve the confidence to speak, and to break their “language barrier”.

The second: we live in a world dominated by stereotypes and prejudice, which can often bring us one against the other. Most ethnic and religious conflicts are based on a lack of knowledge and fear.

With Fluent, we aim to bring a revolution to the language learning world.

We believe in the power of languages, and we want to use it to make the world a better place.

We created a method that connects language learning to it’s context; the culture and the people behind the language, making the process more exciting and more efficient at the same time.

Languages are so much more than rules of grammar and spelling. Languages are also people, a culture, a story. We believe in learning languages through that story.

There is no reason for learning languages to be painful or boring. It can and should be fun and exciting. Our methods are interest-based, proactive and practical. Our students are always active in the process of learning.

At Fluent, we give life to the language.

We see languages as a tool to open people’s minds and to impact society as a whole.

By enabling them to create cross-cultural connections and discover a world that is different from the one they know, we aim to make this world a more accepting place.

Our Fluent community is an inviting space for more than thousands of people to embrace multiculturalism and break social and cultural barriers through the exchange of languages.

Want to bring us to your office?

We have lots of options to help your co-workers or employees get fluent in English, Hebrew, French & Spanish &  work on team bonding at the same time!

Schedule a free intro-session to get all the details with the link below, or reach out at contact@fluent.community

Search for a member of the Fluent community!